The former ‘Tianjin Xingang Shipyard’ was founded in the 1940s in the estuary of Tianjin’s main river Haihe, which opens up to vast harbour areas. It is now located in the centre of the booming economic development zones along the Bohai Sea.

Formerly used as a large-scale ship repair plant and dockyard for ships above 10,000 tons, the facilities will be relocated and integrated in two ultra-large scale shipyards in a port-centered industrial area, by this opening the chance for a completely new urban development. 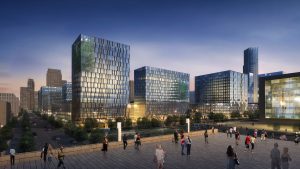 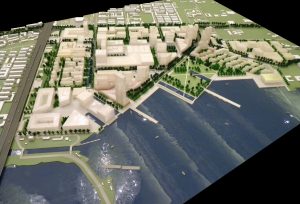 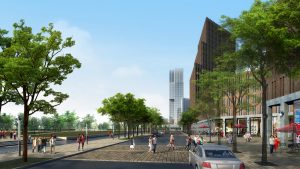 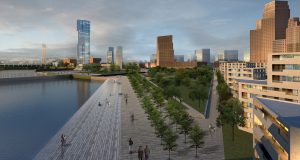 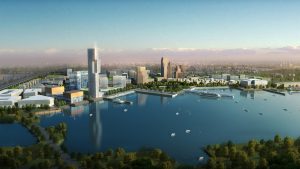 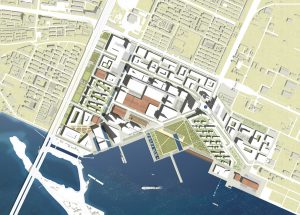 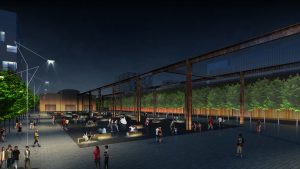 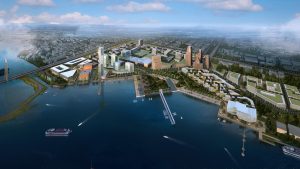 The site holds a number of historical relics to be integrated into the urban planning. The whole plot is intended to become a vibrant mixed-use city district with emphasis on culture and entertainment. The overall design provides around 550,000m² of commercial areas, 620,000m² cultural uses, 300,000m² offices and 270,000m² residences, as well as some 70,000m² …

END_OF_DOCUMENT_TOKEN_TO_BE_REPLACED

The site holds a number of historical relics to be integrated into the urban planning. The whole plot is intended to become a vibrant mixed-use city district with emphasis on culture and entertainment.
The overall design provides around 550,000m² of commercial areas, 620,000m² cultural uses, 300,000m² offices and 270,000m² residences, as well as some 70,000m² areas for creative industries and research.

A logical grid shaping infrastructure and traffic forms the backbone of the urban concept, combining subway lines, regional and local car traffic, and generous pedestrian boulevards through the district and along the waterside. Architecture is giving a third dimension to the infrastructure by forming adequate and memorable urban spaces along the arteries of development.
An integrated city district with mixed functions will live day and night – 24 hours, 7 days per week. To this intent, residential communities have been carefully integrated into the urban pattern: One provides apartments along a newly created canal, with courtyards opening up towards the water; the second provides high-end living facing the planned seaside park.

Successful urban planning creates images that remind of other cities: The Promenade along the harbour reminds of the Promenade des Anglais’ in Nice with its glamorous hotels. The Wharf Park in the former dockyards reminds of the ‚Upper East Side Park’ in New York. The Ocean Plaza, a traffic square almost in the centre of the development, reminds of ‚Potsdam Square’ in Berlin. The shopping street with its natural stone buildings is like Berlin’s splendid ‚French Street’. The Grand Gallery reminds of the passages of Milan, creating a shopping universe with courtyards and lanes. Finally, the water course which brings the sea deeper into the city is evoking images of Amsterdam or Copenhagen.

But on top of that, this urban quarter will be a unique creation with its own personality and charisma, shimmering between old and new. Existing factory buildings are kept as eye-catchers in the focus of important visual axes, mainly accommodating cultural uses. These buildings, as landmarks and symbols for the urban transformation, are giving a distinct identity to the place.

Last not least, the most expensive construction site along the water is given as a public park to the citizens: a green shoreline in the midst of the old dockyards. The Wharf Park – as trademark of a livable city – will be the magnet for visitors searching for recreation. By a water front boulevard, it is connected with the adjacent city areas and will attract and lead many people along the water’s edge.
Closely connected to the park, but dedicated to festivities and open air events, the Central Plaza is formed by historical heritage found in situ: A gantry crane and a former factory hall, both interlocked by a timber platform, are forming an open space that conveys the charisma of the historical use. This big square is linking park and boulevard by a continuous green roof.
The new mixed-use harbour quarter has best potential to become a successful development within the metropolis of Tianjin. A unique network – formed by on-site facts and findings, by infrastructure, urban spaces and mixed functions – will eventually create a recognizable and memorable place.