The design takes the plot as an artificial extension of the existing, neighbouring reforestation area, which is artificial in a similar way. The whole plot is divided into stripes (like the line of trees in a reforestation) with a clear north/south orientation, thus creating regular and equal east-west connections towards the forest. 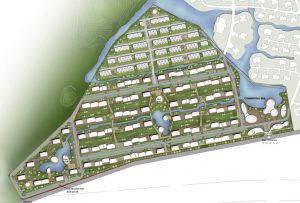 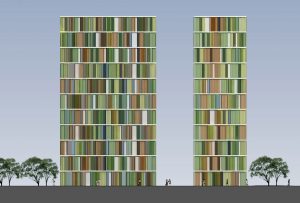 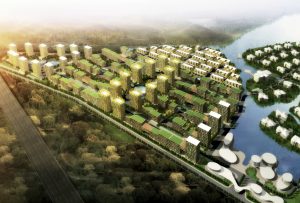 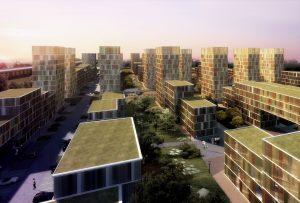 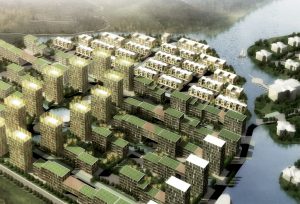 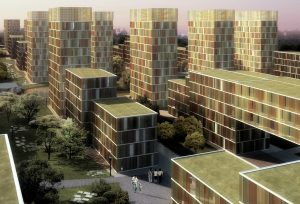 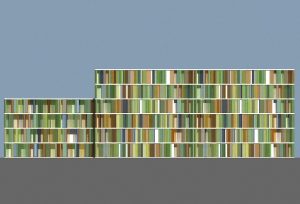 Principle of the urban layout has been to provide every …

END_OF_DOCUMENT_TOKEN_TO_BE_REPLACED

Principle of the urban layout has been to provide every residential building with good views to the landscape/lake and the forest. Furthermore vast open space areas have been created, which are completely undisturbed by car traffic.

In a smaller scale, special attention has been paid to the apartment layout. The building depth is mostly only 10m, allowing the flats to have a maximum of natural lighting. A majority of the apartments have triple orientation and natural ventilation for all rooms.
The façades draw their image from the surrounding trees with their different vegetation densities, allowing sunlight to pass through or to create shadows. This idea is also reflected in a colour scheme which mainly uses green tones as well as in the principle of a ‘second skin’:
The interior façade of the buildings is made of concrete and glass. Separated with a distance of about 20 cm from the wall and attached to it by a metal anchorage, a second skin made of wooden shutters protects the apartments from too much sun exposure. The shutters can be moved by the residents according to their needs, thereby creating a random and lively façade pattern.

The roofs of the buildings also perform as additional garden and can be used as a safe playground for children, partly as semi-public terrace with great views for all occupants, partly as a private roof garden for the top duplex apartments.
Light structure ‚bridges’ between the low-rise buildings are serving as extension space of the adjacent apartments and emphasize as gates the 4 pedestrian corridors in north-south direction.

A special characteristic of this urban planning scheme is its mixture between 4, 6 and 11 level apartment buildings and townhouses. High-rises are not concentrated in one area, but split into smaller clusters, each of them marked by a lake and interconnected with the others by a watercourse.

P.S.: The final realization of the project followed a completely different design language and is consequently shown as separate project in this website.