Located in the district of ‚Lindenthal’, surrounded by old buildings, a married couple of entrepreneurs interested in contemporary architecture wanted to have a private house which should fulfill their special demands for flexibility, for views from outside and inside, but also for culinary and musical delights. A two levels building with flat roof, twelve meters long, is located in the rear corner of an almost square plot of land. Out of this upright cuboid a single-level wing is protruding in the form of a frame open to both sides. 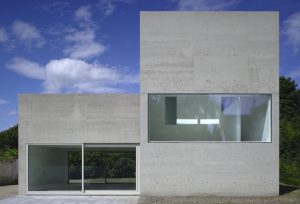 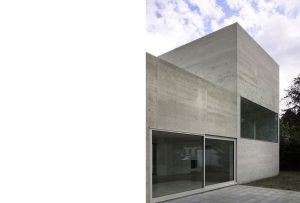 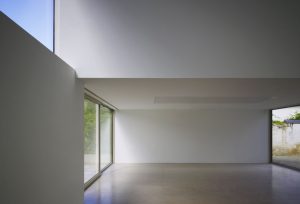 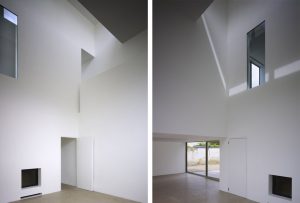 When occupants or guests are approaching the house, the …

END_OF_DOCUMENT_TOKEN_TO_BE_REPLACED

When occupants or guests are approaching the house, they find here the most extrovert and communicative part of the building: the open kitchen as one of the central functions of the building program. With its fully glazed side walls, the kitchen forms a frame towards inside and outside: Whereas the garden and the picturesque houses of the neighbourhood are presented in big formatted frames, the observer from outside will get a deliberate image of the archaic functions of cooking and eating.

In the interior, the flat kitchen space merges into a tall living room inside the adjacent cuboid. The ceiling heights of both rooms which are openly interconnected form an obvious contrast: the low ceiling of the kitchen is emphasizing the horizontal, whilst the double height living room is developing into the vertical. From outside, the living space is secluded and hidden to the view, providing a rather contemplative atmosphere with its window openings located far on top: instead of culinary delights, this is the place for music, retreat, privacy, brief: protection.

The living room gives access to all other rooms on the 3 levels of the cuboid: Working and guest rooms with corresponding bathrooms, storage and wellness space in the basement, as well as bedrooms and bathrooms of the family in the second floor.
Here the flexibility of the building becomes evident: Planned for a family of four which finally will be reduced to the parents as only permanent occupants, the relatively small rooms of the upper level can be simply combined to bigger areas by removing the non-supporting partition walls.