Yingkou is a prefecture-level harbour city in LiaoningProvince (North-East China) with a population of 2.2 million. For its new city hall, the local government organized a competition in which 2 different design proposals had to be delivered.

The project site is located in Beihai District, a new development area of the city. One of the biggest challenges of the design was to fulfil the (at first sight unreasonably) low ground floor ratio of only 10%. 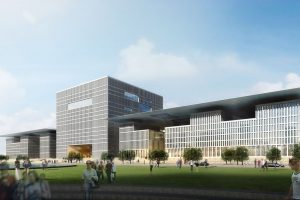 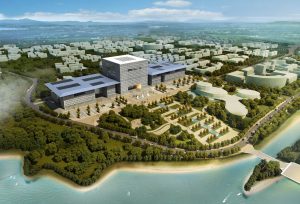 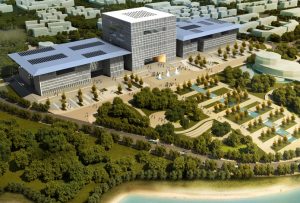 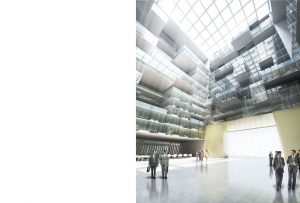 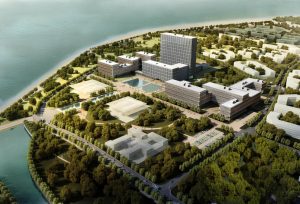 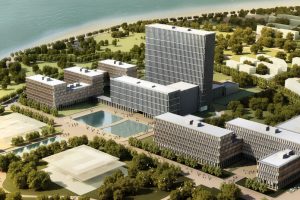 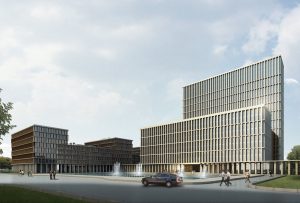 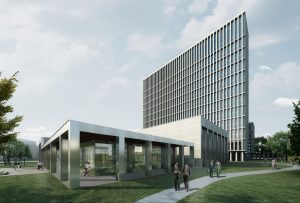 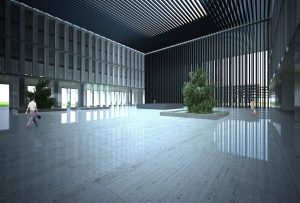 The first design proposal creates a dense and efficient architecture concentrated along an urban axis. The city hall itself is connected to the urban road system through a representative street. The solution allows to give land area back to the city that can be used for parks, cultural centre etc. A governmental building is created …

END_OF_DOCUMENT_TOKEN_TO_BE_REPLACED

The first design proposal creates a dense and efficient architecture concentrated along an urban axis. The city hall itself is connected to the urban road system through a representative street. The solution allows to give land area back to the city that can be used for parks, cultural centre etc.
A governmental building is created that is linked to Chinese culture, but also expresses Yingkou’s aspirations of being a modern city and reference in China.
Three main elements are symbolizing traditional Chinese culture: Podium and roof reminds of traditional Chinese constructions; a monumental volume emphasizing the middle expresses the representative character of the building. By contrast, the building’s functions are quite contemporary.
Entering the main building though its promising golden gate, the effect of the grand lobby is similar to that of an amethyst geode: rough and strong stone on the outside, marvellous crystals on the inside.
Not much different from the main building, the lateral ‘secondary office building’ and the ‘public affairs building’ are made of white stone towards the outside and glass with different transparencies to the interior courtyards. Both building parts are covered by a fifth façade: a metallic reflective roof that protects against rain and sun.

The second proposal refers to the layout of Beijing’s Forbidden City and gives it a modern interpretation.
The way buildings are designed and arranged in the Forbidden City reflects the world-view of the Chinese: The union of human being and nature based on balance and harmony, as well as a philosophy that reflects on the functions buildings are intended for. This style of architecture expressed in the Imperial Palace has been emulated all over China.
In a contemporary application of the ancient principles, buildings are expanding all over the plot providing a variety of courtyards and intimate plazas. On the one hand those buildings have different functions and sizes; on the other hand they show similarity in the language of their façade. Unifying element is an arcade, which interconnects the building parts and links them to the main building. The arcade’s secondary function is to open the ground floor to the surrounding nature.
The general building arrangement follows Chinese traditional culture: The main office building is the highest and biggest building in the centre of the cluster, with a lower building to the south that acts as reception of the entire complex. Both volumes are linked by a glass roof which incorporates the conference space.
Whereas the left side traditionally means promotion or higher-ranking (hence accommodates the ‘secondary office building’), the right side means demotion or lower-ranking (and is the location of the ‘public affairs building’).