The Chinese city of Taicang is located on the mouth of Yangtze River neighbouring Shanghai. Thanks to the good local conditions and the proximity to Shanghai, Taicang has evolved into a focal point for German-Chinese cooperation. Numerous renowned German companies have set up branches here. The Conference Centre is being located within a quarter that is especially designed to exude German quality and atmosphere.
The German Maritim hotel chain has been chosen as operator of the new Taicang Conference Centre to be opened by the end of this year. 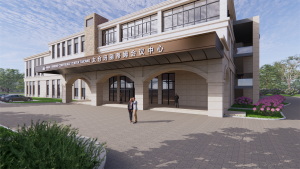 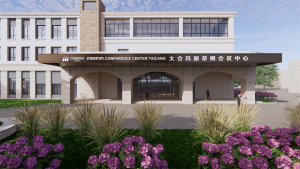 “Maritim Hotel Group” has extensive experience in operating large assembly halls and conference centers of international format. Derived from the German roots of the brand, the design concept is – similar to the adjacent hotel – based on the motto: “Feel the breath of Northern Germany”. Like in the hotel, the interior design translates the …

END_OF_DOCUMENT_TOKEN_TO_BE_REPLACED

“Maritim Hotel Group” has extensive experience in operating large assembly halls and conference centers of international format.
Derived from the German roots of the brand, the design concept is – similar to the adjacent hotel – based on the motto: “Feel the breath of Northern Germany”. Like in the hotel, the interior design translates the underlying idea into an elegant spatial concept, yet in a far more classical approach.
A stone’s throw from the hotel, just crossing below the bridge which spans over Liu River, Taicang Conference Center will find its home in a refurbished building that stretches along the river bank.
At the time of opening, the new facility will be the biggest Conference Center in Taicang with a Grand Ballroom measuring 1,200 square meters, suitable for conferences and celebrations accommodating 600-900 persons.

The buildings has 3 levels, in which the ground floor serves as double-height Grand Ballroom with adjacent VIP Reception room.

The second floor accommodates a suite of 3 luxurious meeting rooms which can be either used in a flexible way as conference area, in which 2 or even all 3 rooms can be combined according to necessities. Or the three rooms can be used for political/economical events in which the first room serves for guest reception, the second for contract signing events, and the third for the subsequent celebration.

Finally the third floor accommodates 3 separate VIP Dining Rooms, each suitable for up to 20 persons, in which smaller exclusive celebrations can be held.

The existing building is kind of neo-classical in its architectural style. The interior design is an answer to the façade style, but filled with and inspired by German, Central European design elements.
As a visitor, one enters the building through an arcade and the impressive double-height lobby, which is kept in light colours and which is using unobtrusive classical style elements.
All the elements introduced in the lobby – classical wall paneling, profiled or coffered ceilings, chandeliers and wall lamps, mirrors and precious flooring materials – are repeated in different variations throughout all the main spaces.
Wood in the form of typical German oak wood is used in special locations, such as the wall paneling in the entire Grand Ballroom as well as in the coffered ceilings of the VIP dining rooms in the top floor.
In all design areas, light colors are combined with furniture and decorative lighting elements that are seeking a balance between tradition and modernity.

Last not least the artworks, all inspired by typical maritime design features (like Delft tiles or Frisian tiles), or the photographs and pictures that show landscapes, buildings and people in North German locations, all stand for the “Maritim” brand on the one side, and on the other side for German culture and German quality which is already an important part of Taicang local culture.