The site is located in a new town east of Jinan. On its west side, the plot is bounded by Lianhua Mountain, which is at the same time the main geographical feature of the site. To north and south, major city roads provide convenient transportation. To the east, Hancang River and Beijing-Shanghai Expressway are forming natural borders. The complex is close to important public facilities such as municipal government, Olympic Sports Center and Convention & Exhibition Center. That makes it attractive for both business and tourist functions. 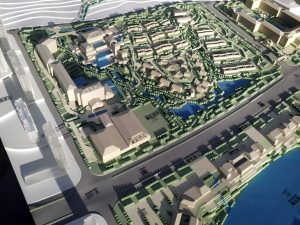 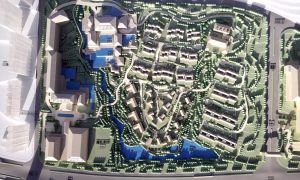 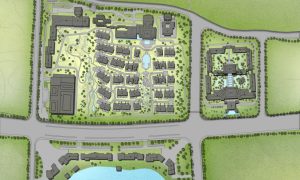 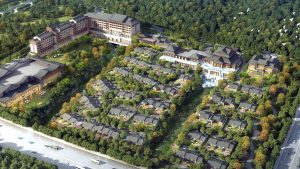 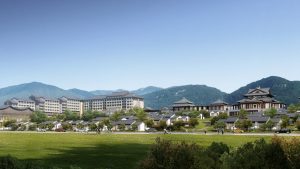 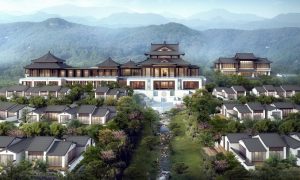 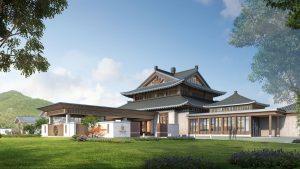 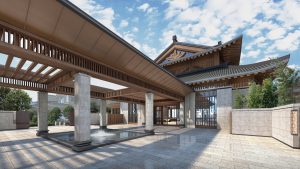 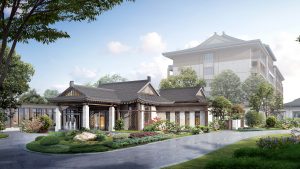 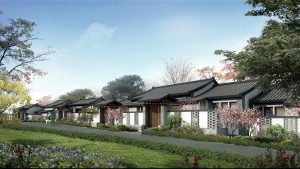 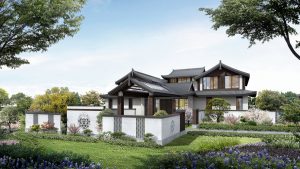 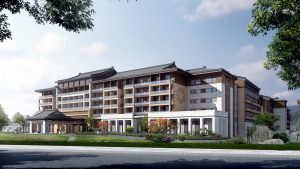 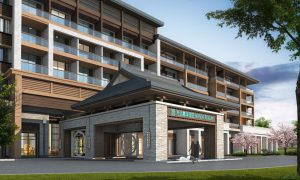 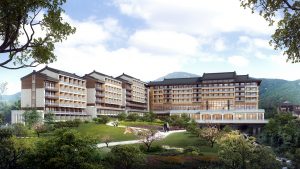 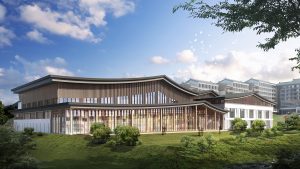 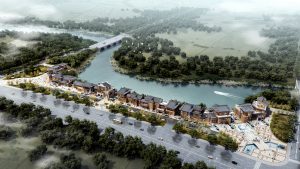 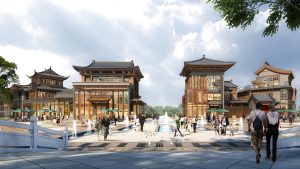 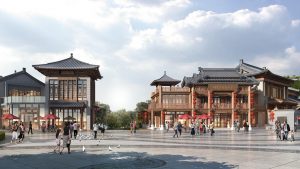 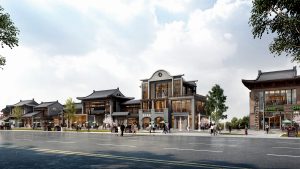 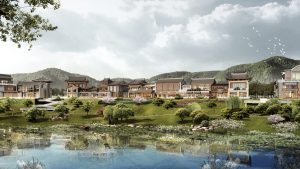 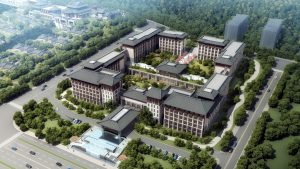 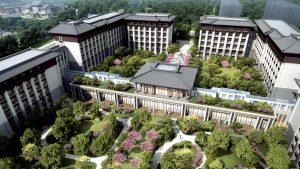 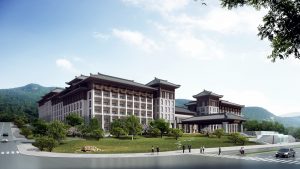 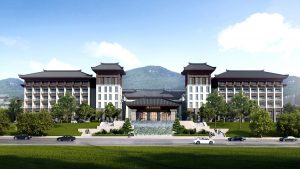 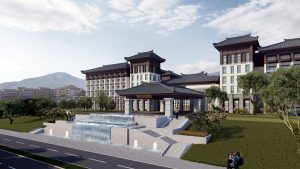 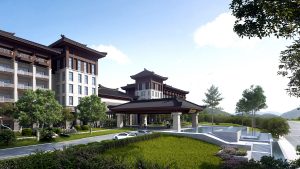 END_OF_DOCUMENT_TOKEN_TO_BE_REPLACED

Jinan has beautiful natural scenery, where many spring waters converge, with unique views many poets wrote about. Based on a specific historical and cultural environment, Jinan’s residential architecture has both the simplicity and weight of the Northern building style and the lightness and transparency of the Canal Towns south of the Yangtze River. RhineScheme’s design is based on these bivalent features.
Typical Northern-Chinese traditional buildings have been taken as reference, whose main architectural features are the ‘XieShan’ type of double-pitched roofs, heavy stone walls and a lively wooden façade design. These features have been adequately translated into the design of a mountain hotel. On the other hand, lightness is achieved in the treatment of architectural details.
The site itself is 10 meters below street level, which posed a challenge in the master planning stage.
Visitors will approach the resort area through a mountain road, where the scenery changes step by step. The master plan necessarily involved the landscape design, due to the pronounced level difference between the site and the surrounding planned streets. Also the slope of the site itself had to be considered (which is in fact the mountain piedmont), in order to achieve favourable unblocked views towards the east.
The topography of the site led to the placement of the higher and larger buildings on the top line close to the mountain skirt. The smaller buildings, i.e. the villas, descend towards the lower levels, with the conference center on the lowest. Across the street, the Bar Street area and Hancang River valley are limiting the complex.

The design of the hotel complex reflects Confucian culture in a refined and clear manner.
Both the main lobby building of the 6 star hotel and the 5 star hotel are aligned on the west side, creating an articulated and charming image, echoing itself the profile of Lianhua Mountain behind them.
Between the two hotels, the spa building serves as connector. Towards the east, the villas are arranged in parallel rows, organized along two artificial valleys that create open views: one in the axis of the hotel lobby, the other one leading down from the 5 star hotel building.
The overall design is like an epitome of the old city; it creates a unique and meaningful resort by following terrain and culture.

6* hotel
The lobby of the Six Star Hotel is a two-storey building that stretches horizontally across the natural water level. Combined with the infinity pool and the falling water feature, it achieves the effect of a wonderland – outdoor and indoor – like in an old Chinese painting. The building is kept in a so-called ‘new Chinese style’. The stretched flat-topped building is dotted with five different antique slope roofs. The top of the lobby adopts the traditional form of the ‘XieShan’ type double-pitched roof, thick but elegant. The falling water forms a contrast between vertical height difference and horizontal architectural form, and a contrast between vividness and tranquility. The combination of flat roof and sloped roof pays a direct tribute to the classic architecture of China during the 1950s and 1960s, at the same time gaining economic advantages.
Moving down the road there is a group of totally 75 villas, planned in accordance with the rich topography of the sloping terrain. Each villa has a broad view, while being hidden between green hills and trees.
The elegance of the entrance lobbies is in harmony with the general flexibility of the villas.

5* hotel
The “Wanda Realm” 5 star hotel consists of 250 suites. The entrance canopy forms a building interspersed among two wooden blocks. Together with the first floor colonnade and a ‘Xieshan’ type of roof it creates an atmosphere of classic Chinese culture.
The public area stands above the first valley. The valley falls suddenly and the height of the building rises sharply. In order to avoid the impression of an excessive building volume, the higher levels’ rooms are made of light-coloured wooden blocks, whereas the ground level rooms have a white coloured base. Finally, dark-coloured wooden areas and glass railings connect the two surfaces in order to create a light, almost floating building volume.
The “Wanda Realm” hotel – facing the street and with its backside close to the valley – expresses an elaborated architectural momentum, at the same time creating the required holiday atmosphere of a mountain hotel.

Bar Street
Jinan Bar Street, along with the unique historical culture and humanist spirit of the city, echoes the city’s natural landscape system with “four sides of lotus and three willowy sides, of a city of mountains with a half city lake”.
The design takes the “spring” as the main topic and by that highlights the characteristics of the city. The bar street adopts traditional Chinese architectural style, extending the traditional vocabulary of old Jinan architecture and folk custom, creating a culture style bar street with the integration of spring and water, and the blending of history and contemporary habits.

Jinan Bar Street is designed for business, tourism and culture at the same time. By integrating different situational blocks, four main themes related with spring water have been developed: watching and tasting water, playing with water and listening to the sound of water.
The uses are: folk culture experience, high-end catering, entertainment and leisure, public facilities, exhibition, scenic or stage settings, and other formats.
The buildings’ elevations have been designed according to the geographical location of the project and the inherent cultural connotations. The bar street adopts the ancient architectural style of the Ming and Qing Dynasties. At the same time, it integrates local and traditional cultural symbols of Jinan and contemporary facade techniques.