The site is located in the city centre of Hohhot, capital city of Inner Mongolia Autonomous Region. It is in the very heart of the business, administration, and cultural district, neighbouring the City Hall and several museums, among them the vast Inner Mongolia Museum just opposite of the site.

The mixed-use complex has been developed in 2 variants based on the same program, but in contrasting design concepts and languages. Both options react to the dominance of cultural buildings nearby by taking local cultural traditions or landscape elements as determining design aspects. 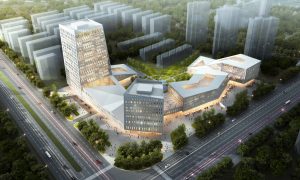 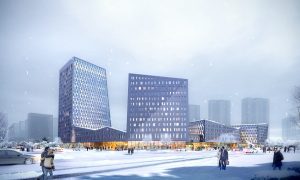 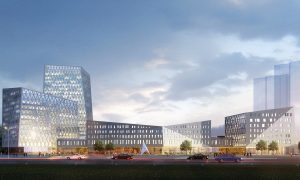 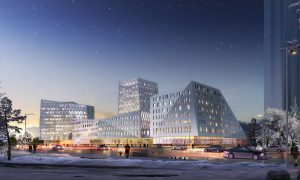 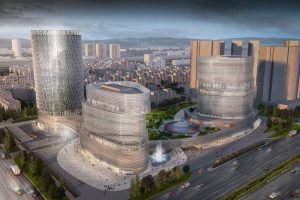 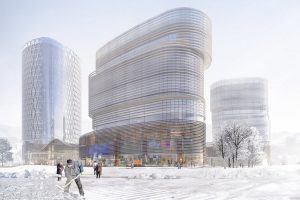 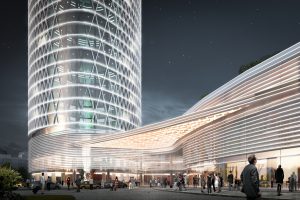 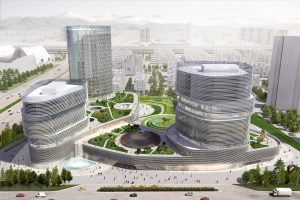 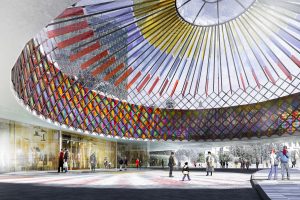 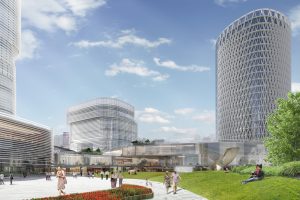 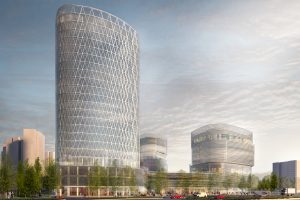 Option 1 is based on four elements that dominate the Mo …

END_OF_DOCUMENT_TOKEN_TO_BE_REPLACED

Option 1 is based on four elements that dominate the Mongolian landscape and identity:
The Mountains, the Grass lands, the Yurt (also known as ‘Ger’) and the Sun.
The architectural language of the building complex can be seen as a mirror of the Mongolian mountains. Similar to the peak of a mountain that is spreading slowly over its skirts and eventually reaches the wide and endless-seeming green lands, the main tower of the complex is part of an undulating base, which – in a play of heights and lows – encloses the whole complex with all its diverse functions in a unitary body. The series of atriums are inspired – in an abstract way – by the free space of the Yurt, which by a self-supporting structure allows for an opening on the top for air circulation.

The sun plays an important role in the positioning of the vertical elements of the complex. The composition adapts its height to ensure the necessary daylight in the neighboring buildings, thus following local regulations in a complex way. The position of the tallest hotel building at the north-west end of the L-shaped base allows the lower SOHO buildings to fully enjoy natural daylight. In contrast, the interior landscaped park which is growing from the center of the plot towards the east will experience a game of shadow and sunlight throughout the whole day.
While the architectural language reminds of the Mongolian mountains with their fine edges in the landscape, the façade resembles the richly decorated yurt cover fabrics, which enwrap the building complex in a smooth, elegant way.

Option 2 is based as well on three traditional elements that define the self-image of Mongolians: The Yurt, the ‘Hada’ (traditional scarf) and traditional colour patterns which will be mainly visible from a pedestrian perspective and from inside.
The proposal organizes the program of hotel and SOHO within three main tower buildings, the highest of which is the hotel as distinctive landmark. The architectural language of the towers can be seen as vertically extruded yurts, as their shape with curved plans clearly refers to the traditional Mongolian tent.

The fluid language of the podium façade which wraps around the towers symbolizes the fabric of the traditional ‘Hada’ with its message of welcoming and greeting. The podium is inviting the visitors with generous concave gestures towards the interior park.
In both the open and covered urban spaces, colour patterns that are traditionally used in the interior of a yurt aim at providing a sense of domestic warmth within the scale of the project.