The site is located in the city center of Hohhot, the capital city of Inner Mongolia. It is in the very heart of the business, administration, and cultural district, neighbouring the City Hall and several museums.

The project is specifically placed next to the City Hall, along Donghe River which crosses the city from north to south, and also – as particular feature – has open views to the vast mountains in the north. Therefore, the project aims to be visually respectful of its surroundings and to best take advantage of the site regarding views and sun incidence. The positioning of the buildings is carefully determined to guarantee best views from all towers. 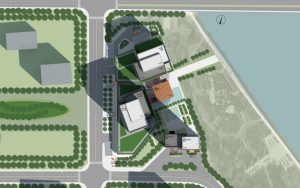 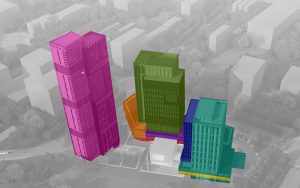 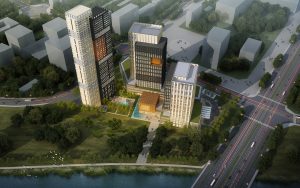 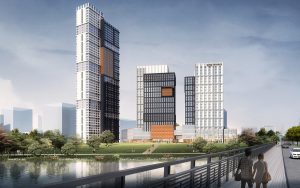 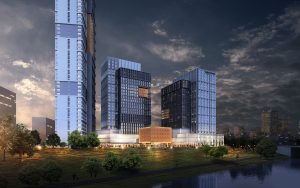 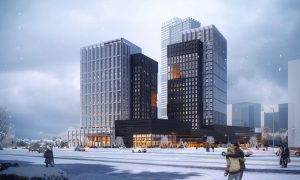 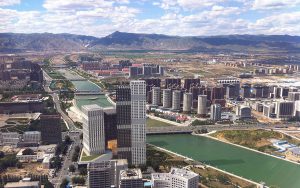 The plot is also situated within a disconnected system …

END_OF_DOCUMENT_TOKEN_TO_BE_REPLACED

The plot is also situated within a disconnected system of public areas. At the east side, the plot is linked to a public green belt following the riverside, however interrupted by the bridge. At the west, there is a public plaza for the use of the surrounding office buildings, and at the north, there is a large public square in front of the city hall. Hence, the pedestrian circulation is of high importance to determine an appropriate environment and to achieve a connective and useful public space.

The massing follows three main principles: First: Public green links to integrate the surrounding public areas. The ground floor level is sliced in a curved shape to lead the pedestrians into an organic flow, which defines and separates the public circulation from the private ones. Second: Volume Retention. Due to the reduced land area available for the program, the buildings are arranged in groups to be combined, and thus, obtain a better use of the space. All the uses are then grouped forming 3 main towers. Finally: Rotation for optimized views. The two smaller towers are rotated to face the mountains in the North and the river in the East. This layout allows the two buildings not to block each other, while opening the view from the residential tower.

Regarding the façade, each group is visually divided in two opposite colors, where each color has a grid with different density answering the structure and the modulation of the interior space. Then, special elements breaking the grids, with similar materiality, are placed towards the west, to create focal points, visible from the bridge.
The project is intended to be developed in two phases, each one with specific uses. The first stage will contain mainly the Hotel and SOHO. Whereas the second stage, as further development, will have the residential tower, office tower and complementary uses such as commercial areas, kids educational center, spa and small cinema which will be placed at the core of the public space, to increases the flow of users through the public space.